PREPARATION FOR THE MEMORIA OF BLESSED EDMUND IGNATIUS RICE

Br. M. C. Normoyle, cfc,  was one of the great internal historians of the life and works of Blessed Edmund Ignatius Rice. His biography of our Holy Founder is entitled A Tree is Planted: The Life and Times of Edmund Rice, published for private circulation amongst the Brothers in the 1970s. Along with that, Br. Normoyle published a number of other related books providing a sample of the archival materials on which A Tree was based. One of those is called A Companion to A Tree is Planted. It contains a whole range of correspondence by, with or about Blessed Edmund. A striking feature of this most useful book is the fact that, by a very big margin indeed, the contents deal with secular rather than with sacred matters.

The fact is that Edmund Rice was an exceptionally able man of affairs, who, throughout his life, both as layman and, it must be emphasised, as religious, put his undoubted mastery of the ways of Mammon at the service of God and his People. Almost to the day he died, he administered temporal assets of all kinds and he specialised, as it were, in the oversight of charitable donations and bequests for and on behalf of a whole range of Catholic persons and Catholic interests. This involved him in matters legally complex, often vexed and sometimes litigated. It involved him with the then Commissioners for Charitable Donations and Bequests. Rightly or wrongly, fairly or unfairly, Catholics were very suspicious indeed of this body. The actual commissioners themselves were almost universally Protestant and given that they had, under legal principles such as that of cy-pres and mortmain, the authority in certain circumstances to intervene and, in effect, re-allocate charitable funds to objects close to, but other than, those designated by the donor, almost nothing would persuade many wealthy Catholics that their wishes would be wholly respected by the Commissioners. Those who did proceed with donations and bequests were very careful in their choice of executors and the fact that, throughout his life, Blessed Edmund was chosen to oversee charitable funds  amounting to something of the order of hundreds of thousands of euro in today’s terms, demonstrates the extent to which he was regarded as a man of hard head as well as of kind heart by his fellow Catholics.

Some, of course, of his Brothers in religion strongly disapproved of the involvement of their Superior in litigation, in particular. Involved, however, he remained and there are, in fact, grounds for contending that Blessed Edmund Ignatius Rice was always much more a business-man than a school-man, more engaged with accounting than with teaching, convinced that it was precisely by doing all in his considerable power to ensure that the Brothers and their schools never lacked the wherewithal to keep going, that he would best serve the instruction of youth, especially the poor, in religious doctrine and their training in Christian piety.

What will surely be seen in centuries to come as one of the great documents of Christian tradition, Lumen Gentium, the Dogmatic Constitution on the Church, promulgated at the Second Vatican Council on 21st November, 1964, included a chapter (the fifth) headed “The Call to Holiness”, containing this famous pronouncement: “… all Christians in any state or walk of life are called to the fullness of Christian life and to the perfection of love … (paragraph 39)”. This authoritative  confirmation of the Universal Call to Holiness tells each and every one of us here tonight that, simply in virtue of our Baptism, we are called by God to be saints, to be perfect in charity, to love God above all for his own sake and the neighbour as ourselves for the love of God.

Now, we grow where we are planted. If we happen to be planted on Skellig Michael, then we are meant by Providence to grow in the Spirit on Skellig Michael. If, however, we are, like Edmund before us, planted in the hustle and bustle of the quays of Waterford, then we can be sure that it is on those same quays of Waterford that Providence intends us to grow in the Spirit. The circumstances of our daily lives are the circumstances of our serving and, therefore, the circumstances of our sanctification. The stuff of our everyday lives is the stuff of our coming to the fullness of our life in Christ. This here and this now is, in the eternal dispositions of Providence, for me  both the house of God and the gate of heaven, where I am meant to find the Lord and where I am meant to reach him.

Chapter 17 of the Rule of the aboriginal and undivided Society of the Presentation is headed: “Of the Perfection of the Ordinary Actions of the Brethren …”. It states: “The perfection of the religious soul depends, not so much in doing  extraordinary actions, as in doing extraordinarily well the ordinary actions and exercises of every day … “. We must do what we do do well! There is nothing greater, nothing better, that we can do. This, in fact, is both the seed and the fruit of Christian love within us; the centre and the circumference of our being in Christ; the test of any holiness we may have.

Euro-communists of the second half of the twentieth century advocated a Long March through the institutions. They hoped that, just as the Long March of the Red Army in the 1940s in China took it beyond the reach of its then more powerful enemies, allowing it time and space to renew itself and return to conquer the country on the field of battle, so, in these different times and circumstances, cadres must make their way through the institutions and agencies of the modern state, must  occupy them, control them, own them, use them in the service of the party and of the people.

We, “faithful followers of Jesus Christ, must also journey through space and time. We must undertake a pilgrimage of grace, as it were, through those same institutions and agencies, leavening them with the Word of God and the Ways of the Kingdom. We are a Pilgrim People, spiritual nomads, travellers, refugees, still in via, not yet in patria. We are peregrini, “resident aliens”, in exile here but hoping to reach our true homeland in heaven. The fact is, though, that we can only come to the heavenly city through the earthly, mundane as it is, ordinary, everyday, material and secular as it is. Dusty and dirty it may be but, again, is for us, as it was for Edmund,  the house of God and the gate of heaven.

Thus, in Blessed Edmund, we have our pioneer, our scout, our path-finder, our trail-blazer. “Arise: Let us go from here”: Let us  go out after him to find and serve the Lord and the neighbour “amidst the bulks of actual things”. I will finish by reciting Liodán an Rísigh, composed by a former monk of this house, an Br Oir. S. E. Ó Cearrbhaill, an outstanding interpreter of the Founder’s charism: [FJS] 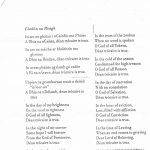