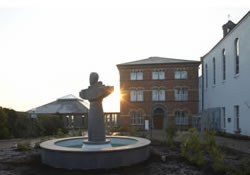 The new centre comprises a new chapel, a meditation garden and   a completely refurbished museum and heritage centre. It is located in Waterford   on the site where Edmund Rice founded his first community of Brothers and   established his first school for the education of poor boys in the city, as he   said himself, “to raise them to the status of men.”

The new buildings and centre is a joint venture of the two congregations of   Brothers founded by Blessed Edmund Rice – the Presentation Brothers and the   Christian Brothers. The community now living at Mount Sion is an international   community made up of members of both congregations. The Brothers come from   America, Australia, Canada, Ireland and Pakistan. The new CEO of the Centre is   Br. Pat Madigan a Christian Brother from Co. Clare who succeeds Andy Kuppe, an   Australian member of the worldwide Edmund Rice Network. Barry O’Brien, the first   CEO of the Centre, had overseen the new developments and buildings.

Edmund Rice began his educational mission among the poor of Waterford. His   work was strongly supported by the people of the city, though some of his   friends considered it a folly for him to give up his successful business career.   However, the people of Waterford always expressed their appreciation of the work   of this Kilkenny man. It is fitting that Waterford should hold pride of place in   honouring and propagating the story of Edmund Rice whose spirit and mission has   spread to all six continents.

There are about 350 Brothers in Ireland and England today. Though no longer   visible in the schools to the same extent as in the past, the Brothers of both   congregations have been evaluating and reframing their life and mission in   Europe and further afield.

The Christian Brothers have created a new European Province for their life   and mission into the future. In Ireland, within the last year, they have   established three new communities, which are carefully developing a new form of   community life for new expressions of mission. In particular, these communities   are exploring with other people the meaning, value and purpose of all of life in   the rapidly changing world and church in which they live. They are seeking to   share their spiritual search with others.

Presentation Brothers have recently founded new communities in Slovakia and   Nigeria. Both Congregations have jointly opened a new community in Geneva to   work with organisations which advocate for the rights of children all over the   world.

The educational work of the Brothers continues in schools and especially in   Educational Life Centres which respond to the needs of young people who at   different stages of their youthful journey find the mainstream schools unsuited   to their needs.
The establishment of the Edmund Rice Schools Trust represents   a radical shift in trusteeship and management of the brothers’ schools. The   Brothers are formally handing trusteeship and management of the schools to men   and women who are willing to take this responsibility as a service to young   people in the state and in the church.

The Brothers’ congregations continue to grow and develop in thirteen   countries in Africa as well as in India and South America. Indigenous Brothers,   with some assistance from expatriate missionaries, are providing for the   educational needs of poor and marginalised peoples. Like the Brothers in Europe,   they are seeking new ways of living in community and like Edmund Rice, their   values of presence, compassion and liberation are at the service of the poor   through education and other empowering services.