Edmund Rice and the Brothers Today 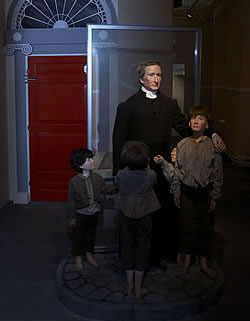 Between 1802 and 1820   schools had been opened in Waterford, Carrick-on-Suir, Dungarvan, Cork, Dublin,   Cappoquin, Limerick and Thurles. The Brothers in Cork and Thurles were   volunteers from these cities, who were trained in Waterford, but returned home   and made profession of vows to their diocesan Bishop. Like the Presentation   Convents, the community was subject directly to the Bishop of the Diocese.

This system was not convenient for Edmund as his vision was to open schools   “in all parts of the kingdom.” Transferring Brothers from one diocese to another   was a complex process. However, while remaining autonomous, all communities   looked to Edmund Rice and Waterford for guidance and direction.

In 1820 Pope Pius Vll approved the rule of the Religious Brothers. Its   principal feature was that all the Brothers in all dioceses would be directly   obedient to the Superior General. However, when the time came in 1822 to accept   the new rule several Brothers and several communities declined to accept the new   system. The principal school to opt out was in Cork.

One Brother in Cork, Brother Augustine Riordan, seeing the entire Cork   community observing the new Rule approached the Bishop who permitted him to open   his own school in the south side of Cork City. In that year there were two   Presentation monasteries in Ireland, in Cork and Cappoquin. The Cappoquin school   closed in 1845 with the death of its founder, Brother John Ignatius Mulcahy. In   Cork, the North Monastery was run by the Christian Brothers while the South   Monastery was run by the Presentation Brothers. The next Presentation School was   opened in Killarney in 1836 under Brother Paul Townsend.
The Presentation   Brothers were the first to open schools outside Europe, in India and the United   States, in 1841. Among the early distinguished Presentation Brothers were   Brother Michael Augustine Riordan and Charles Bernard Riordan from of Doneraile,   County Cork.

The Presentation Brothers saw the organisational benefits enjoyed by the   Christian Brothers of having Papal approval and they applied to Rome for similar   approval which was given in 1889 and a Superior General was elected. The   immediate result was the opening of new schools in Cork and Birr and further   expansion followed in Ireland, England and worldwide.

In recent times, the Christian Brothers and Presentation Brothers are jointly   involved in several new projects. These include the new development and the   community at Mount Sion; the Advocacy & justice Office in Geneva; the   promotion of devotion to their Founder; Blessed Edmund Rice; formation and   retraining programmes like Trasna and Tóir; and in Edmund Rice   Camps for needy children in Ireland. Both Congregations now have joint   trusteeship of the Edmund Rice Centres in Callan and Waterford.

Today the Presentation Brothers live and work in Ireland, England, Canada,   the United States of America, Peru, the West Indies and Ghana. Blessed Edmund   Rice is honoured in the Mardyke in Cork where a special garden, honouring the   women associated with him, has been developed.